"Fresh and replacing the self-righteous old guard." - In Bed With Maradona

'I Wish I Was A Geordie' is an American blog dedicated to the Newcastle United Football Club in the English Premier League of world football (soccer). The site provides NUFC fans in the U.S. a place to find and share information, analysis and commentary about the club. Of course, fans in England and elsewhere are also welcome. The blog is written and operated by three American journalists who have been captivated by the passion surrounding Newcastle United: 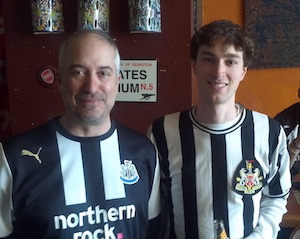 Bob Schwoch started writing about soccer at The Milwaukee Journal in the 1980s as the original reporter covering the Milwaukee Wave, now of the Major Indoor Soccer League, as well as the beat reporter for Marquette, Wisconsin and UW-Milwaukee college soccer. He went on to become a political reporter and later a press aide and chief of staff in the Wisconsin State Legislature before striking out on his own as a freelance writer and media relations consultant. Since 2006 he has served as a teacher and advisor in the School of Journalism at the University of Wisconsin in Madison. Two years after graduating from the University of Wisconsin, Tom Ziemer had an American sports fan's dream job, covering the NFL and the Green Bay Packers for the Wisconsin State Journal. But his true love in sports is the brand of football the rest of the world follows. He now works as a communication specialist for the College of Letters and Science at the University of Wisconsin, and serves as a staff writer for WisconsinSoccerCentral.com.

Matt Feltz is a freelance writer based in Boston who usually writes about biotechnology and bioethics. But Newcastle United and the science of soccer are his secret - or perhaps no longer so secret - obsessions. He joined Tom and Bob on the blog in December 2011. For more about the creation and mission of the blog, click here for the original post. You can also read our interview with ESPN Soccernet. Contact Bob, Tom and Matt at newcastleunited.us@gmail.com.